Sponsorship helps Save A Life! Sponsor an at-risk animal from our rescue. Cats and kittens are from owner relinquishment, abandoned rentals or the streets. Money is used for vaccinations, deworming and spaying. Your sponsorship or donation pays it forward for the next animal in need.
Studies reveal cats don’t just purr when they are happy; felines do this when they are in pain too. The question of why has been a big issue among researchers. Sine findings indicate that a cat’s purr may have healing abilities—and this applies to humans, too.
If you have an injury and need to mend your bones, petting a cat and the sound of its purring might help you heal faster. If you pay enough attention to your feline friends, you might have noticed that after having a tough day, cats tend to purr a lot. This was also seen as a cat’s way to heal itself. 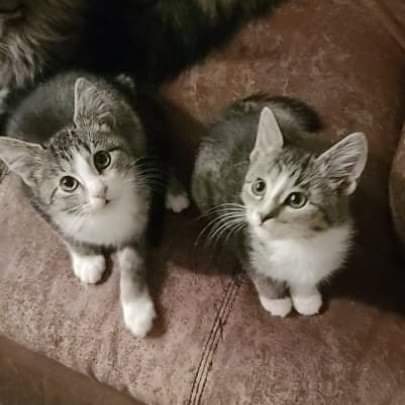 Our kittens, Raya and Maru are almost a year old now and we allow them limited time outside. They love hunting mice and shrews. I did not know shrews were bigger than mice. They make our lives so much better. Getting both of them was the right decision. They keep each other entertained, they sleep together, eat together, groom each other and snuggle up with us at night. The dogs now pretty much ignore them. Please thank the lady that fostered them. They take care of each other with their grooming activities and don't fight over food. We love them.
Kitten Policy Changes 2/27/22
​Quailwings Rescue Adoption Policy Change For Kittens
We are changing our policy about adopting kittens. There are several reasons for the changes based on research and studying kittens and cats over 50 years.

*Raising two kittens means that your cats will pick up on feline behavior cues. Both kittens will learn how to behave socially and will be more well-adjusted!

*When you bring home two kittens, they will have a built-in playmate. Both kittens can burn off extra energy by chasing, pouncing and play hunting each other throughout the house. Giving them an outlet for their kitten crazies means they’ll have less energy to engage in destructive behaviors like scratching the couch! Nail caps, double stick tape, cat trees, scratching post help them to leave your furniture and drapes alone.

*Cats learn how to “speak” cat by interacting with other cats, so raising your kittens together ensures they will learn how hard to play, how to share territory, how to communicate their needs and many other crucial social skills. In the future if you add more cats to your household, your kittens will understand how to interact with them and the new addition will have an easier transition into the family.

*If you work long hours, a single kitten can become lonely being the only one in the house. Despite the jokes that cats prefer their own company, kittens are actually very social creatures! The territorial nature of cats is a main factor in them seeking solitude, and it generally doesn’t kick in until adulthood. For this reason, kittens crave the attention and fun of a playmate. Having two cats at home means you don’t have to feel guilty leaving for work or vacation since you know they will keep each other company.
*Kittens learn by copying the behaviors of others, so having two kittens means less time training them for tasks such as using the litter box. Kittens learn the basics of how to gauge distance, walk along narrow objects, balance, climb, tumble and stalk during the first year of their life.

*Having another kitten to copy and learn from can help your cat understand his limits during playtime and keep him safer into his adult years. In addition, if one of your kittens has a bigger personality while the other is quiet and nervous, the more adventurous kitten may help teach your shy cat to be more confident and playful!

*Kittens normally begin to groom themselves between 4 and 5 weeks old. Often kittens will groom each other as a sign of protection and affection. It’s difficult for cats to reach their own faces and ears, so they may rely on the other cats in their home to keep these areas tidy.

*They watch each other to learn how to play together, how to use the litter box, and how to interact with humans.

*Having two cats reduces the chance that your cats will be overweight. Even as they get older, cats will often start up games with each other resulting in zooming around the house, pouncing from underneath furniture or jumping up on cat trees. Living an active lifestyle as they age and not becoming overweight will increase their lifespan and keep them healthier overall.

*While introducing a new kitten into the family can help to get your senior pet moving, one kitten’s endless drive to play can harass an older cat who wants to spend his days snoozing and not babysitting.

*The great thing about two kittens is that two hardly costs more than just one! Kittens can share litter boxes, cat trees, food and water bowls, beds and toys!

*It’s suggested that you choose two male cats or a male and female combination, if bringing home two kittens who are not already bonded as they tend to get along better than two females.

*Despite their independent natures, cats are social creatures that need companionship to thrive. Left alone, a cat can develop behavioral problems, and in some cases, even show signs of depression. Cats in bonded pairs, on the other hand, are more likely to be better adjusted.

*Bonus reason: You'll save two lives instead of one...
​
*Bonded Pair Adoption - It's easier to adopt a bonded pair than it is to introduce a new cat later. Adopting a dynamic duo ensures that you'll have a harmonious home for years to come!